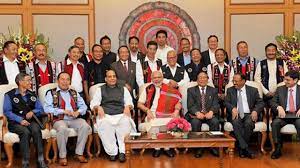 Tamil Nadu Governor R N Ravi has resigned as interlocutor for the Naga peace process to prevent it from derailing.

Agreement in this regard: