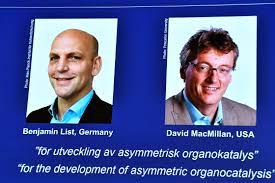 Two scientists have been awarded the 2021 Nobel Prize in Chemistry for their work on building molecules that are mirror images of one another.