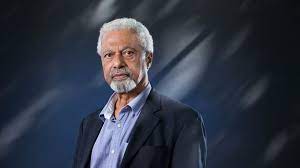 Abdulrazak Gurnah, 72, who was born in Zanzibar and now lives in the UK, became the fifth African writer to win the Nobel Prize for Literature, after Nigerian writer Wole Soyinka (1986), Egyptian Naguib Mahfouz (1988), and South African writers Nadine Gordimer (1991) and John M Coetzee (2003).