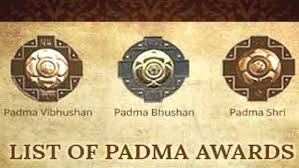 This year the President has approved the conferment of 119 Padma Awards including 1 duo case (in a duo case, the award is counted as one) as per list below.

Padma Awards are one of the highest civilian Awards of the country conferred in three categories, namely –

Disciplines in which awarded: It is given for distinguished and exceptional achievements/service in all fields of activities/disciplines.

The award does not amount to a title and cannot be used as a suffix or prefix to the awardees’ name.