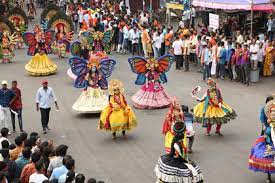 Karnataka Government will release ₹1.5 crores to the Parashurama theme park coming up at Karkala.