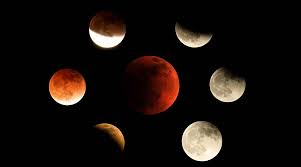 A total lunar eclipse will occur on 8 November, 2022. The eclipse is visible from all places of India at the time of Moonrise.