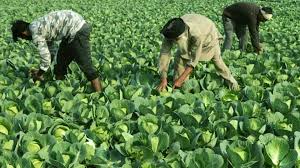 The Central Government admitted that no actual assessment of farm income has been carried out since 2013.