Protests Of The Jain Community: 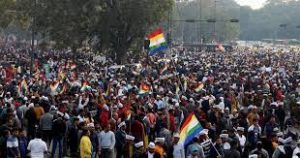 Members of the Jain community have been staging protests across the country for the past two weeks over demands related to two holy sites — Sammed Shikhar on Parasnath hill in Jharkhand and Shetrunjay hill in Palitana of Gujarat.