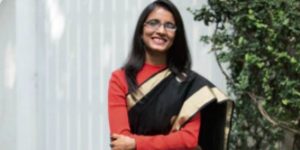 The Ramanujan Prize for Young Mathematicians from developing countries has been given to Professor Neena Gupta.