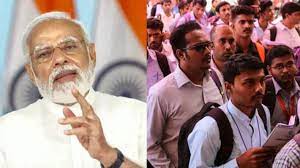 Prime Minister Narendra Modi announced that his government would be recruiting 10 lakh personnel within the next 18 months (1.5 years), “on a mission mode” , a major drive after recruitment to government jobs was derailed following the COVID-19 pandemic.