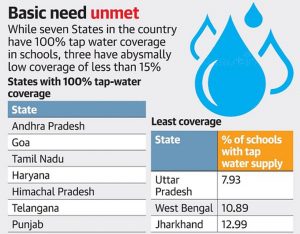 According to information provided to the Parliamentary Standing Committee on Water Resources, Only half of government schools and anganwadis have tap water supply, despite a 100-day campaign for 100% coverage being launched by the Jal Shakti Ministry in October 2020.