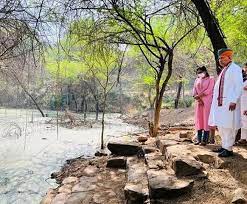 The Ministry of Culture has ordered the restoration of Historic Anang Tal lake in South Delhi.