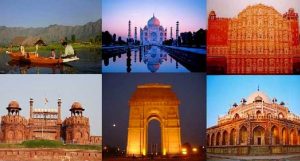 Minister of Culture and Tourism informed Parliament about the Measures taken by the Government to preserving and promoting the traditional cultural heritage of India.