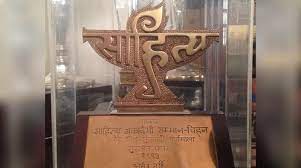 The awards, recommended by distinguished jury members were approved by the Executive Board of the Sahitya Akademy under its President Chandrashekhar Kambar.