Section 437 Of The Code Of Criminal Procedure: 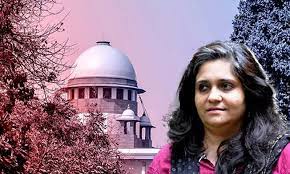 Chief Justice of India, U.U. Lalit, in its order on activist Teesta Setalvad on September 2, made an oral observation that under Section 437 of the Code of Criminal Procedure (CrPC), a woman is entitled to favourable treatment.