Shankhalipi Inscriptions On The stairs On An Ancient Temple: 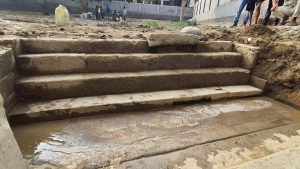 Archeologists have found ‘shankhalipi’ inscriptions on the stairs on an ancient temple dating back to the Gupta period in Uttar Pradesh’s Etah district.