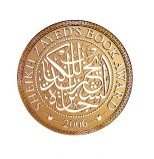 Prominent German philosopher Juergen Habermas had turned down the Sheikh Zayed Book Award over its ties “with the existing political system” in the UAE, a hereditarily ruled country long criticized for its suppression of dissent.