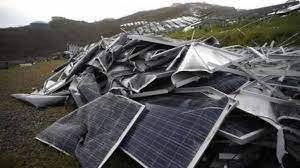 According to a report by the National Solar Energy Federation of India (NSEFI), India could generate over 34,600 tonnes of cumulative solar waste in India by 2030.