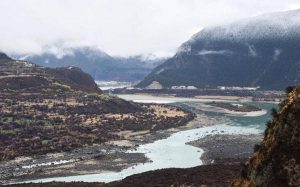 China has completed the construction of a strategically significant highway enabling greater access to remote areas along the disputed border with Arunachal Pradesh in India.