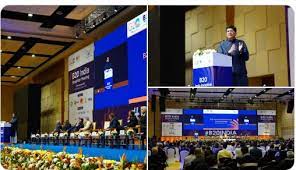 The B20 Inception Meeting was held in Gandhinagar, Gujarat on the sidelines of G20.