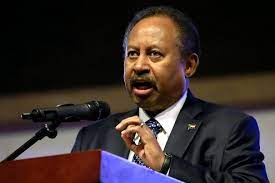 Sudan’s Abdalla Hamdok has resigned as prime minister, six weeks after returning to his post following a military coup in October.