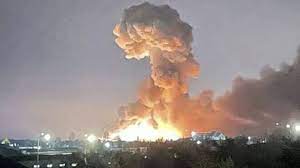 Russia has resorted to the use of dangerous thermobaric bombs — or vacuum bombs — in Ukraine.