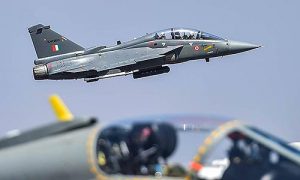 According to the Ministry of Defence, three new fighter jets will be flying by 2026, of which two will be for the Air Force and one for the Navy.