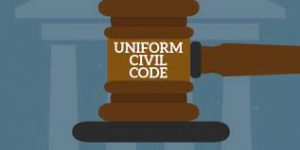 Chief Justice of India S A Bobde recently appreciated the uniform civil code (UCC) in Goa, the only state to have one.