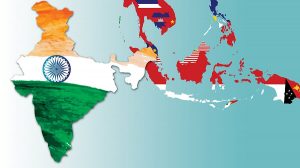 The Union Minister of State Development of North Eastern Region (DoNER) said that connectivity is an important element of Act East Policy.