What Is Planet Parade? 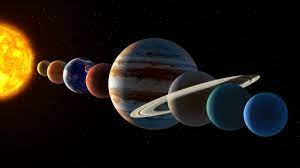 Over the past few nights, Venus and Saturn have been gradually coming together in the sky which was visible through the naked eye.