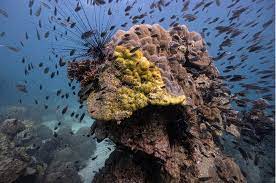 Scientists found that corals of eastern Thailand are getting affected by Yellow band Disease which is killing corals over vast stretches of the sea floor.