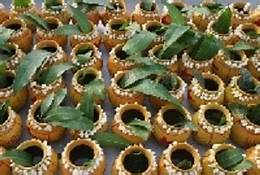 The Ambubachi Mela is an annual Hindu mela held at Kamakhya Temple in Guwahati, Assam. This yearly Mela is celebrated during the monsoon season that happens to fall during the Assamese month Ahaar, around the middle of June when the sun transit to the zodiac of Mithuna, when the Brahmaputra river is in spate.