Assam government is setting up three-degree colleges in the Bodo region: 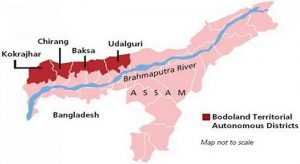 The Union Home Minister Amit Shah said the Assam government is setting up three-degree colleges in the Bodo region. Tributes are being paid to Shri Upendra Nath Brahma by opening an institute in his name.