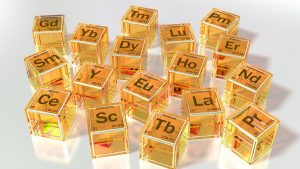 China’s dominance in the rare earth metals, key to the future of manufacturing, is posing a major concern for the West.