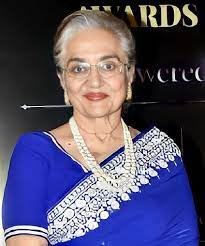 Legendary actress Asha Parekh will be honoured with Dadasaheb Phalke Award for the year 2020.