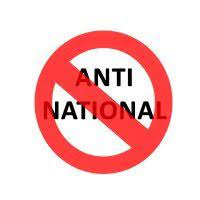 The word ‘anti-national’ has not been defined in statutes, the Ministry of Home Affairs (MHA) informed the Lok Sabha.