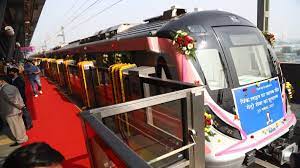 Union Minister of Housing and Urban Affairs alongwith Transport Minister for the Government of National Capital Territory of Delhi virtually inaugurated the Unattended Train Operations (UTO) on the Pink Line of the Delhi Metro.