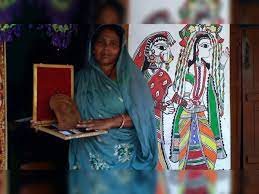 Prime Minister Narendra Modi has expressed gratitude for the gesture by Dulari Devi, an artist from Bihar’s Madhubani, who presented him a sample of her artwork during an informal interaction with Padma awardees at Rashtrapati Bhavan.