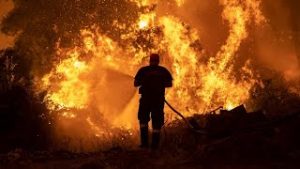 Wildfires are continuing to rip through the Greek island of Evia with strong winds driving flames towards villages. Greece is experiencing its most severe heatwave in 30 years in which temperatures have spiked to 45C.