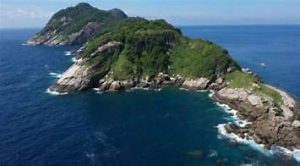 Ukraine has caused significant losses to the Russian military in airstrikes on Zmiinyi Island, also known as Snake Island, in the Black Sea.