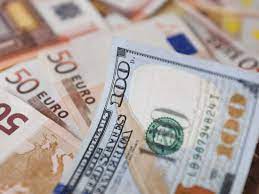 The Euro and the U.S. dollar reached parity, meaning one dollar could buy one euro in the foreign exchange market.