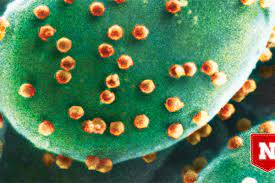 Researchers have found the first known “Virovore,” or organism that eats viruses.