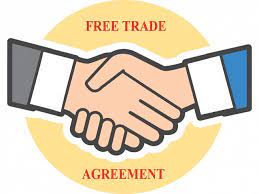 The Commerce and Industry Ministry said that India is in dialogue with Israel for concluding a Free Trade Agreement (FTA).