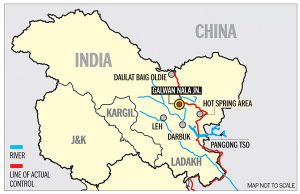 Villagers have lost access to a vast grazing area near Gogra in eastern Ladakh owing to growing Chinese presence in the area.