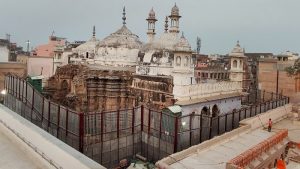 A Varanasi district court dismissed an application filed by the Anjuman Intezamia Masjid Committee challenging the maintainability of the suit filed by five Hindu women seeking the right to worship Hindu deities within the Gyanvapi mosque (located in Banaras, Uttar Pradesh) premises all year round.