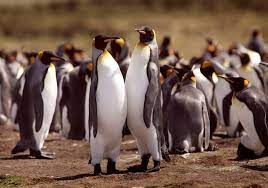 A recent study in the Antarctic reveals that king penguins are threatened by climate change.