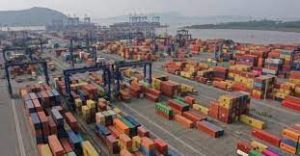 Jawaharlal Nehru Port (JNP) has become the first major 100% landlord port in India, having all berths being operated on the PPP model.