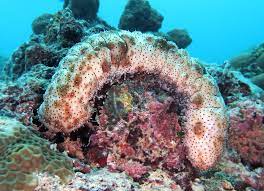 Sea cucumber in India is treated as an endangered species listed under schedule I of Wildlife Protection Act of 1972.