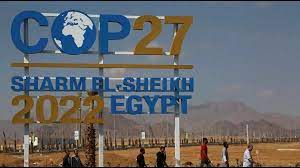 During the COP27 climate summit in Sharm El Sheikh, Egypt, the UAE and Indonesia announced the “Mangrove Alliance for Climate.”