Many Olive Ridley Turtle Found Dead In The Godavari Region: 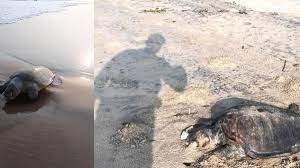 Hundreds of Olive Ridley turtles were found dead in their breeding grounds between Kakinada and Antarvedi in the Godavari region of India’s east coast.