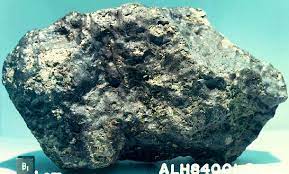 A new study published in the journal Science, offers an explanation for the existence of organic compounds on the surface of Meteorite called (ALH) 84001.