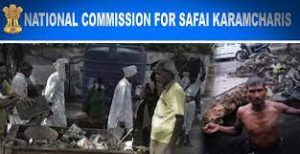 The Union Cabinet has approved the extension of the tenure of the National Commission for Safai Karamcharis (NCSK) for three years beyond 31.3.2022.