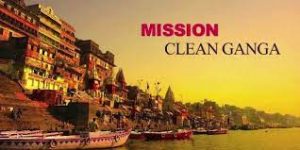 The National Mission for Clean Ganga (NMCG) in its 36th Executive Committee has approved new projects for rejuvenation of six rivers in Uttarakhand.