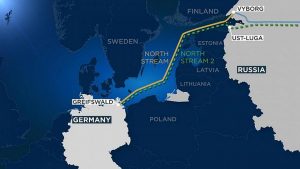 The US has said it will stop the Nord Stream if Russia attacks Ukraine.